Hell has frozen over

This weather/the universe rant is knocking off one of two posts about some disciplinary problems that will be hilarious one day if I attain my second of my two parenting goals, keeping the boys out of juvy.  (Because it is important to manage life by setting high but achievable goals.)

When I’m already “grumpy” because someone decided 5am would be a great time to wake up and roll, it is not in the best interest of anyone to freeze the water in already wrapped pipes.  My showers are like coffee.  With few exceptions (which usually involve a vacation away from schedules and chores), I NEED my showers to function and not bite off heads.

If I lived anywhere but the desert, there would be snow.  Since I did move to the desert, I expected certain things.  Like the fact I’ve already lived through the hottest day on record here, 119°, I think.  Maybe 118° or 120°.  Once you are able to cook food on the hood of your car, numbers really don’t matter, and digital thermometers should just start blinking “HELL.”  I’ve accepted the fact that it is clearly stupid to live in the desert if you are of Northern European descent.  No one looks good with lobster red skin, and no one feels super to have portions of skin cut out by a doctor.  Bless the person who invented sunscreen.  Needless to say I also expected not to be frozen when I’m outside.

Every time I psyched myself up, I felt a new low.  Like: Ok, the pipes are frozen; it’s going to be freezing.  Then I walk outside, and it’s worse than I fear.  Much worse.  I psyched myself up as I buckled everyone in and turned on the car to hear the dj say that it was 19°  with the wind chill of 0°.  Zero, people!  What part of desert does this weather system not understand?  But I rationalized the numbers away.  Then I got out of the car and remembered that the houses are so packed in my neighborhood that they act as a partial wind-break.  I shut the door and strung enough cuss words to make my older cousins proud of the day they taught them to me.  Holy crap, it was cold!

Yes, I did confirm it.  I have now lived in the coldest day in Tucson history.  F- me.  I’m immigrating.

Inspired by Gibby over at LOST in Suburban Bliss, I took this picture a couple weeks ago, where my car bakes outside the garage, where my husband’s car basks in the coolness. 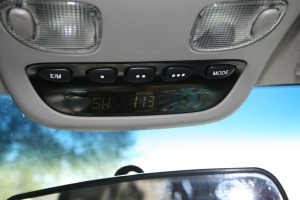 Welcome to Hell. But at least there's no humidity.

I took this after five minutes of driving to my parents’ house.  I think we found the solution to global warming.  Now if the governments of the world would just pay for gas, car upkeep, and time, I’ll be happy to drive around, cooling the earth.  Don’t thank me; just build many statues in my honor and pay me a comfortable salary when I erase a hundred years of warming. 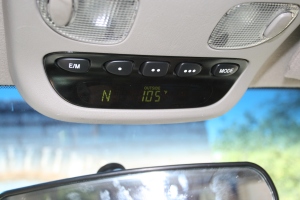 Wow. Now it's so much cooler. Almost enjoyable.