A Battle of Wills and Water

I grew up in a competitive family. My parents played sports. My brothers and I played sports. We played board games and video games. We compete. Games are meant to be won. In fact, I have never finished a game of Monopoly because things would get heated when someone embezzle from the bank.

Lately my mother has been trying to compete with me. First it was over Duolingo. Now it is over steps. I refuse to be sucked into this. I shudder as I remember listening to my mother, her sister, and their mother compete over how many pounds they lost over the week. (Shudder.)

Today my parents, my boys, and I were swimming. I was forcing the boys to go over strokes when Tornado E decided to rebel in the middle of the deep in.

My mom: (To Tornado E) I bet you can’t tread water longer than me.

Tornado E did not know what she meant, and I have obviously failed as a mother. So I quickly taught him.

My mom: I bet I can tread water longer than your mom.

My eyebrow shot up. I have been swimming longer than I could walk. I spent my summer days in water, having the skin cancer to prove it. I have 12 swim seasons under my belt.

Me: Oh, I don’t think so. I can tread water longer than both you and Tornado E.

So we treaded water. I wish we had thought to time it. But it was too late before I thought about it. We treaded until Tornado E grew bored and complained about the contest.

Me: Fine. Quite. But I bet you I can outlast you.

Tornado E: How much?

We treaded more water and more. I regaled Tornado E with stories of treading water for five minutes and ten minutes. I told him in high school we would have to tread water without our hands.

Tornado E: What if I stopped and dunked you?

Me: Do not make me lose to your grandmother.

Tornado E: What if I did?

Me: How many workbook pages do you want to do over vacation?

With that, Tornado E turned and tried to attack my mom. She held him at bay with a foot out.

My Mom: Tornado A come play with Mama!

Tornado A, who had been torturing his Papi, turned to us with a devilish grin.

Me: Do NOT make me lose to your grandma!\

Tornado S looked over from his play with Papi. Both boys started swimming towards us.

They swam straight for my mom, who held them off for a while. Barely. Seeing that they could not get close, Tornado A switched tactics. He climbed out of the pool and jumped in as close as he could to his grandma. The other two boys followed.

Tornado S: Ok. Guys. We should come from all different sides.

Me: Aww, they’re working together. (Stage whisper) Do it quieter?

My mom: Why are they all after me and not you?

Me: Because you’re the fun grandma.

I looked at my boys, trying to help me.

Me: You know. I don’t need your help to beat her.

Then the boys all jumped in. Tornado S distracted my mom; while, Tornado E dunked her. Tornado A swam into my arms and kissed me.

And I have my own little minions willing to fight for me.

So This is Summer

We made it through another school year. The last semester found me on the side of the street with a protest sign and the nights emailing, calling, and sending postcards to all my favorite Arizona legislators. When that unholy mess was only marginally solved, I raced to get my students to learn something and gain enough points that the lack of essay writing in the third quarter wouldn’t send them to hell. Most of them made a spectacular pull out of the nose dive; while, others have the next 4 weeks planned out for them. It wasn’t all that bad; I had some amazing students who did amazing things. One day they will all do amazing things.

As for the Tornadoes. The oldest two decided to test my patience by falling into Cs and Ds. They lost their video games until they were back up to Bs and As with the threat that they would see no video games over the summer if I saw anything lower than a B on their report card. Apparently Tornado A would like to skip a grade because 2nd grade was too easy. Everyone made Honor Roll and Principal’s List and earned a Presidential Award. There’s a joke about the last one, probably several, but it’s like shooting large fish in a small barrel.

We began summer with the boys coming with me to school to finish a few chores as I turned in my grades. The Tornadoes left no doubt in anyone’s mind as to why I can deal with freshman. Three rambunctious tornadoes running through the halls with plastic swords as they lead or follow their mother from room to room to collect signatures. Yup. 30 freshmen are nothing compared to the three Tornadoes.

After I finished my work, we had our traditional First Day of Summer Lunch. Ice cream. Two chocolate shakes, one hot fudge sundae, and one Brownie Blast Sundae. Tornado A insisted on macaroni and cheese to go with his hot fudge sundae. The kid has a hollow leg.

Then I took the boys to see Solo. We made it with plenty of time to get popcorn and get to our seats. The teen at the counter gave us extra butter. The boys rarely played with the electrical chairs. Thank God. It was a fun movie, and we all enjoyed it. The boys especially loved some of the scenes near the end.

As luck would have it, I got them for that first night and into most of the next day. Enough time for a late night swim and cake for breakfast. (Blame the breakfast on my parents.) The boys are making some real progress with The Simpsons. They’re already on season 15; I’m so proud.

When they left, I was enlisted to organize the boys’ room. My mother’s grand plans dwarfed my own. So what else could I do this weekend but organize and clean. It’s not like I could use the time to catch up on sleep and healthy eating. Nope. It’s time to organize, so I can center and refocus. Never a dull moment.

But at least I have more time to write.

I have a debt of gratitude I owe Anissa Degrasse.  She submitted a recipe to Taste of Home magazine that the boys and I love.  It’s a great recipe to make with the kids.  I let the boys pour and mix.  And it’s a wonderful treat to eat.   It’s my cheating ice cream.

Now I’ve made a few changes to the recipe, but I’ll publish Anissa’s original.  I have yet to use vanilla pudding because I buy mainly chocolate or pistachio (which I use only for a special cake).  Since I was using chocolate pudding any ways, I dropped the chocolate chips.  I know.  Me the chocoholic.

Now I have an idea.  I think this would be a great recipe with other flavors, so if you try it with another flavor or a different type of pudding (because I’m thinking of a certain blogger who has pudding day and who is organic and vegetarian), please come back and share.  We could make our own book!

In a large bowl, whisk milk and pudding mix for 2 mins.  Let stand for 2 minutes or until soft-set.  Place chocolate chips in a shallow bowl.  Fold whipped topping and marshmallows into the pudding.  (I folded in whip topping first, then marshmallows.)  Spread over half of the graham crackers.  Top with the remaining crackers.  Press edges of each sandwich into the chocolate chips.  Wrap individually in plastic wrap; place in an airtight container and freeze.  (I strongly recommend wrapping them in foil.  I haven’t yet placed them in an airtight container.)  Remove from freezer about five minutes before serving.  (Who can wait five minutes?)

*Anissa, sweetheart, we need to come up with a better name.  Anyone have suggestions?

**Last time I made these I decided to wing it and put in half a bag miniature marshmallows before I thought something wasn’t right.  But they turned out good.

*** I have yet to make just two dozen.  So keep a few extra graham crackers on hand.

Inspired by Gibby over at LOST in Suburban Bliss, I took this picture a couple weeks ago, where my car bakes outside the garage, where my husband’s car basks in the coolness.

Welcome to Hell. But at least there's no humidity.

I took this after five minutes of driving to my parents’ house.  I think we found the solution to global warming.  Now if the governments of the world would just pay for gas, car upkeep, and time, I’ll be happy to drive around, cooling the earth.  Don’t thank me; just build many statues in my honor and pay me a comfortable salary when I erase a hundred years of warming.

Wow. Now it's so much cooler. Almost enjoyable.

I tried a new sunscreen the other day.  But I forgot that I completely loathe spray sunscreen.  As a very white girl with a strong history of skin cancer (as in it’s not if, it’s when), I need to make sure the family is completely covered.  Apparently this slipped my mind when I purchased the misting sunscreen. I rectified the situation by spraying lots of the damn stuff.

The new sunscreen, our new enemy

Evan helped me rub it into his own skin.  He was proud to help, to be a big boy.  Then he rubbed his eyes. 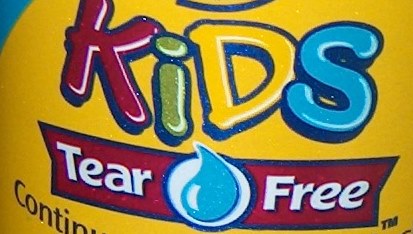 Don't we have laws to make them stand by these statements?

Evan started screaming, which I yelled over the scream “cry, cry” as it is the best way to get the stuff out of his eyes.  But Evan can’t stay still when he’s in pain.  Off he went, stomping his feet, twirling around, basically doing the best imitation of a rain dance I have ever seen.  I almost wish I could have recorded it.  If he had been an adult, I would have been rolling on the ground laughing, trying to catch my breath.  Because this is a little pre-schooler which happens to be my son, I just giggled a little before I tried to wash out his eyes.

I am a bad mommy.  I just can’t decide where I made my mistake: buying the sunscreen, letting Evan rub his eyes, yelling at my son to cry, or giggling over his pain dance.